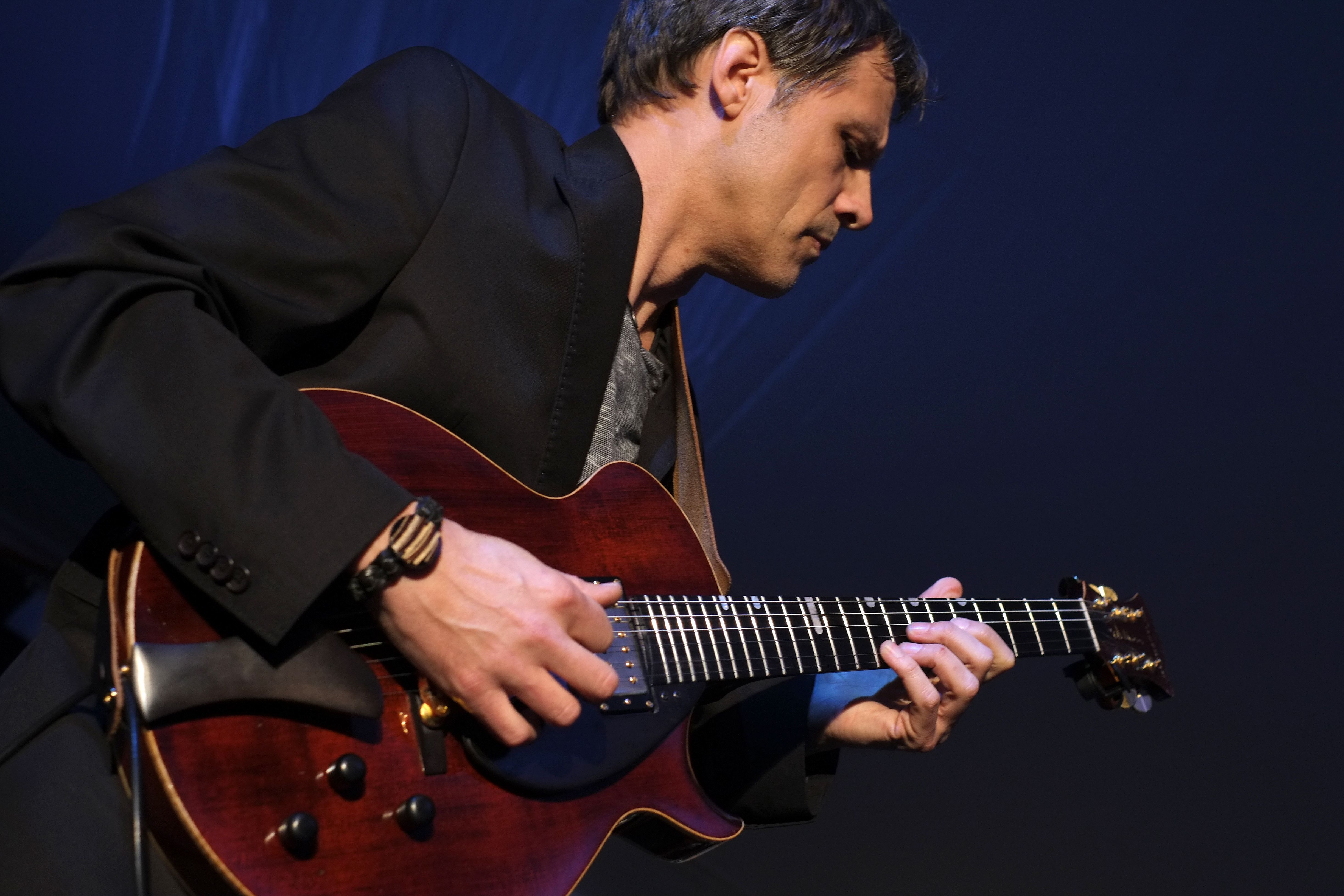 “Space Cycles” is the new album from jazz guitarist Jim Robitaille, who cut the album with his trio that includes Bill Miele on electric bass and Chris Poudrier on drums.

Guitarist Jim Robitaille was having a busy year, with the release last October of “A View From Within,” which featured him playing with saxophonist Dave Liebman and members of Liebman’s band, and the April 24 release of “Space Cycles” with Robitaille’s own trio. And of course that was all squeezed in between teaching at UMass-Dartmouth, where his work on the faculty includes teaching jazz guitar and leading jazz ensembles, which often allow the students to jam with visiting jazz luminaries.

Robitaille lives in New Bedford, so it’s natural he’s on Whaling City Sound, the superb jazz label that Neal Weiss founded several years ago. The other members of the trio are also area natives, with bassist Bill Miele living in Providence, and drummer Chris Poudrier a Lakeville resident.

“I had met Neal years ago, and knew him as a fan of the music long before he started the label,” said Robitaille from his New Bedford home. “Anybody in the New England area and beyond knew Neal for that. It’s great having Whaling City right here and everything they do all comes from his passion and love of music.”

Robitaille had been looking forward to a tour of Europe for three weeks in April, including a recording date in Vienna where he’d be accompanying a jazz trumpeter. All of those dates were canceled or postponed and he was devoting himself to promoting the new record. The trio had the foresight to make a couple of videos during their sessions, so Robitaille was working with media and radio stations to offer those videos and do all the usual work to get the word out.

But as April turned into May, Robitaille’s world encountered more upheaval as his mother contracted COVID-19 and died near the end of the month. That forced him to cancel a couple of online appearances and since his last live performance was March 13, he said he’s eager to get back in the action.

“I had a nice month or so of pre-promotion for the April 24 album release but then the last month has been crazy,” said Robitaille. “I think we’ve all been writing a lot and trying to get back to regular life. The ensembles are a big part of what I do at the college and those are not happening the rest of this term or in the fall. There are a lot of cuts and concentration on the mandatory classes needed for degrees, so the pandemic has affected a lot of things.”

“I’ve been working with Bill and Chris way longer in other settings, with different artists over the years,” said Robitaille. “We had done a lot of work in a quartet with a pianist that was booked a lot. But at the jam sessions at UMass-Dartmouth, I encourage the students to come up and jam and a lot of those sessions are done with my trio. This record has kind of come out of that, but the truth is that we’ve known each other long before that.

“This album came out of concerts and club dates we’d played,” Robitaille said. “We do have something special, where, when you’re in the music you feel like you’re tapping into each other. Everybody is in tune collectively, so that the music is conversational, reactionary in a way. You feel like you know where somebody is going next. We’ve had a lot of time developing that feeling.”

The new album certainly showcases how much variety a talented trio can deliver, from the bright and enticing “Natural Selection” where the fluidity of Robitaille’s playing is just magnificent, to a lightly swinging cover of “Baubles, Bangles and Beads,” to the mid-tempo canter of “February 12th,” where the trio takes us on a subtle melodic trip, anchored by Robitaille’s sterling chords. “Transitions” is a remarkable piece and not just because the liner notes tell us it travels through all 12 keys, but more because its sprightly melody carries it along so effortlessly those technical aspects are secondary.

“That’s how I really meant that song to turn out,” said Robitaille. “You never really compose from a technical standpoint and I think all of that is working in the background. What’s guiding ‘Transitions’ is the melody, which is actually very simplistic, almost sing-song. But the guiding force for me is always melody — it all comes from a lyrical element, because I sing all of this stuff when I’m composing. I think it’s an involuntary response — it’s impossible for me to hear music and not get to sing.”

The title cut, “Space Cycles,” begins with tentative notes, two- and three-note chords, with the drums percolating underneath. A bass solo is the catalyst that propels it into a gliding jazz-fusion melody that is utterly transporting.

″‘Space Cycles’ has two main movements; the first is very tight, with the rhythm section delivering funk in a different way, and then the second part is more contrasting that,” Robitaille noted. “But then we have bass and drum solos, so really it has four sections. But there is a kind of life force to it — sometimes when writing, the challenge is just to get out of the way. I had written that first section really fast, but probably had about six versions of the second part, because I never was satisfied with them. This one is the version we had been playing live most often, and we have finally settled on it.”

The album’s two ballads, the romantic reverie “When We Passed” and the whimsical “Never Never Land,” have Robitaille playing on his nylon-stringed acoustic guitar, yet with the kind of understated majesty that marked Wes Montgomery’s best.

“I have studied classical guitar, and I always had a love of Brazilian music,” Robitaille said of the acoustic tunes. “It can be tricky playing with drums and acoustic guitar, because you can only get so loud. We can make it work in the studio but it is hard to do it live and find that balance.”

Probably the most commented on number is Robitaille’s cover of the Beatles’ “Here There and Everywhere,” where the melody is recognizable, but the trio performs it in such a way as to let it breathe, in an open-ended, soaring kind of jazz take.

“We did that in one or two takes, and there’s no real arrangement — it’s just how we felt,” Robitaille explained. “I think it helps if you bring in some pop, or standards. It helps if you can introduce music fans to a tune that might be more universally known or sound familiar to more people. You’re widening the scope of the jazz repertoire for your audience. If they like that, they might start to think about your other tunes that they might not know. We almost want to obliterate the idea of genres, and appreciate it as just music. And especially on an album, you want to have your own originals dovetail with stuff like that, so it all flows.”

Robitaille’s different voicings on guitar are more incredible when you remember he doesn’t use much in the way of effects, or added electronics, yet he can sound like keyboards or horns, and always has impeccable touch.

“I’m probably in the middle there,” he said, laughing. “I know some players just go straight into an amplifier. I do use reverb, and an in-and-out modulation delay — kind of like a sustain effect. And I usually use an overdrive — I think early Charlie Christian or Wes Montgomery always have that when they’re digging in. But I look at it like a saxophone reed. I use it to get a more reedy sound, not really distortion, but more for sustain. My sound is constantly evolving, because I think your sound is most important; your listeners’ response and emotions are all triggered by that sound.”

Robitaille said he is hoping to take part in some streaming online shows soon, and one of the venues that’s been discussed is Weymouth’s Article 15 brewery.