BY JAY N. MILLER |  FOR THE PATRIOT LEDGER

We always like to do a year-end list of the best jazz albums, because while it may not be the most popular style, there are still electrifying artists breaking new ground or performing and composing in  established forms that deserve wider notice. The Boston area is also of course home to several music schools where jazz is a big part of the curriculum if not the total focus. And our proximity to New York City means we also have the chance to be exposed to reams of new music coming from that jazz center.  And with 2020 finding many of us with more spare time than ever, the prospect of new and exciting music to hear — and having the time to savor it — made it seem like a very good year for jazz. And don’t forget, since many of these musicians are locally based, or at least on the East Coast, it should be easy to find them performing in our area, once the world opens up again.

Here are the top jazz albums we heard this year, in no particular order. 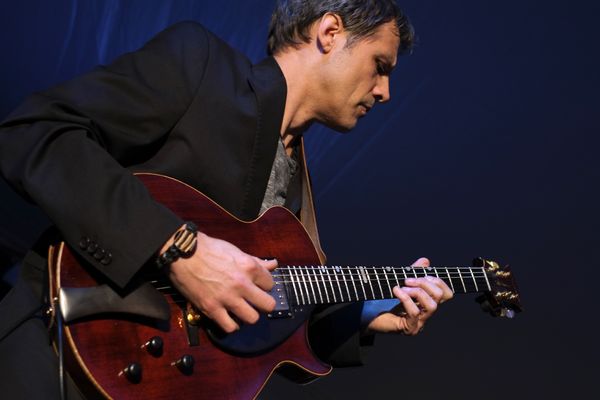 Guitarist Robitaille is a New Bedford resident who teaches at UMass-Dartmouth, and has several fine albums on the South Coast’s excellent “Whaling City Sound label. On this one, joined by Providence bassist Bill Miele, and drummer Chris Poudrier of Lakeville, he provides another brightly effervescent sample of his marvelous technique. There’s a swinging take on “Baubles, Bangles and Beads,” but also more adventurous stuff, like “Transitions,” which manages to be infectious while traversing all 12 keys. The title cut achieves the unlikely goal of being both astral and funky, for a most dazzling sonic journey. (Whaling City Sound)

Tenor sax player, and Berklee College of Music alumnus, Stephens heads an unusual trio here, with just bassist Ben Street and drummer Eric Harland, but it is based on some of his role models like Sonny Rollins, Charlie Haden, and Joe Henderson, who also recorded in this format. The key to Stephens’ work here is its accessibility, as the rare trio format doesn’t get in the way of intoxicating fun. Key quote: “Creating music just for musicians does not appeal to me,” and Stephens is determined to create jazz that casual music fans can embrace. His own “Loosy Goosy” is one fine example of that, and his “Faith Leap” is actually a re-imaging of John Coltrane’s classic “Giant Steps.(Contagious Music)

THE PROSPECTOR by BRUNO RABERG TRIO

Boston bassist Raberg enlisted Austin McMahon on drums and Allan Chase on saxes for his own foray into the sax-trio format, but this is also a jazz record with broad appeal. Raberg admits his own musical roots were first in rock, and then jazz and fusion, and that omnivorous musical appetite is obvious in his infectious music. “Isometric Rotation” uses mirrored melodies, but makes that technical feat seem intriguing. “Triloka” weaves in some flavors from the music of India, while the lovely “Lockleigh” has a Celtic aura underlying it. (Orbis Music)

EXCURSIONS AND ADVENTURES by TIM RAY

Boston pianist Ray is joined here by his fellow Berklee College of Music faculty member Terri Lyne Carrington drums and bassist John Patitucci for this enjoyable mix of covers and originals. Ray is a much in-demand pianist, and has played with a wide variety of pop and jazz artists, and his versatility is reflected in this music. There are some fabulous covers of rock songs, like the Rolling Stones’ “Paint It Black,” and Billy Preston’s “Nothing From Nothing,” but also stellar jazz numbers like Carrington’s tribute to Wayne Shorter, “Samsara,” and Ray’s own delectable “Gone, Not Forgotten.” An all star trio by any measure, they deliver a superb album. (Whaling City Sound)

There are some exotic song titles on this album from drummer Jayaweera, a Sri Lankan native, and this work was done with help from the Australian Council for the Arts, but it was recorded in Rhinebeck, New York.  And honestly, despite the exotic flavors, most of the music crafted by the core quintet (with one tune having vocalist Lara Bello) is simply edgy post-bop jazz.  Jayaweera is a talented composer and arranger, as shown on the smooth midtempo “Galadari,” or the elegiac ballad “Nilus.” These tunes don’t merely jump from one solo to another, but present the melodies as stories, unfolding in a charming way, and the lyricism behind “The Elephant,” and especially pianist Aaron Parks, is breathtaking. (Earshift Music/Outside In Music)

Bassist and composer Omer Avital is one of the most accomplished bandleaders in NYC, often called ‘The Israeli Charlie Mingus’ for his adventurous work. In the 1990s he led a sextet that included four saxophones. This is his second album with the quintet Qantar, which includes four other Israeli musicians who came to NYC to pursue jazz, including Alexander Levin on tenor sax, Asaf Yuria on tenor and soprano sax, Eden Ladin on piano, and Ofri Nehemya on drums. This is the most engaging and outstanding ensemble work of the year, with arrangements that flow naturally with plenty of energy. Avital, who’s often played at the West Village jazz club Small’s, also founded the venue Wilson Live in Bushwick, Brooklyn, where much of this music was crafted in rehearsals and jams. There’s such kinetic force in “Shabazi,” it could be a rock song, yet the lilting ballad “Zohar Smiles” is no less entrancing. Who can resist “Just Like the River Flows,” a relentless yet soothing epic where pianist Ladin’s evocative touch is the exquisite core. (Zamzama Records)

More: It's a wrap: 'Emma,' 'The Father,' 'Palm Springs' are a few of her favorite films

This is yet another unique trio format, with Moran on vibes, Gary Versace on Hammond B-3 organ, and Tom Rainey on drums. Moran is a Berklee College grad who got his master’s at The New England Conservatory, and he was voted a Rising Star in the 2014 Downbeat magazine critics’ poll on vibes. But in another persona, he has also played drums for two decades for the brass band Slavic Soul Party.  Moran works in Carnegie Hall’s Weill Music Institute, and also helps provide music education at Sing Sing prison. A lot of the music here is almost experimental, but quite interesting, such as on “Spring,” where moody vibes and organ seem to frame the drummer’s lead lines. “Chord Conversation” is intriguing, as it sounds like the players are going in three different melodic directions, yet it all is in harmony. And the mystery vamp underlying “Effish” could be the theme song for my next favorite film noir. (Diskonife)

It seems like we get a new album from Eldar every year, and this is the 12th one from the Russian émigré, so it shouldn’t be surprising that the former child prodigy is now 33. Djangirov came to the United States, Kansas City to be precise, at the age of ten, already an awe-inspiring pianist, who was playing on NPR by age 12. He’s graduated from USC, relocated to Los Angeles, and continues to wow jazz fans with his mind-blowing technique.  On tunes like “Anthemic” you might believe he was Art Tatum’s doppelganger, but he can also be tender and evocative, as on the cover of “Willow Weep For Me.” You can’t deny the propulsive force behind “In July,” or the pure power of the title cut, but even on lively numbers like “Blackjack,” Djangirov’s mature mastery of nuance is never overshadowed. (Twelve Tone Resonance)

More: Music Scene: Stoughton's Mike Viola is still doing that thing he does

Kansas City native Stein came to Berklee College of Music to study jazz at age 30, and after post-grad work at Harvard, returned as a professor. The guitarist intended this album to mark his stepping away from the classroom to devote more time to creating his own music.  Although he lives in Jamaica Plain, Stein’s 15th album was recorded in Sao Paolo, Brazil with four musicians from that area. Stein wrote seven of the dozen tunes here, but all showcase his mastery of tone and melodic nuance, while the arrangements give plenty of room to his bandmates. The sprightly “Rio Escuro” is a practically a duet with alto flutist Teco Cardoso, while pianist Daniel Grajew drives the charge of “Kobe.” Cardoso, on alto sax, gets to strut on Joe Henderson’s “The Kicker,” while “Brazilian Hug” is a buttery samba that relies on the whole quintet. Stein cites Wes Montgomery as an influence, and that’s obvious on his beautiful take on “A Taste of Honey.” There’s a terrific combo sound on Pat Martino’s “Cisco,” and a great bass solo from Frank Herzberg, with nifty drum accents from Ze Eduardo Nazario there and all over the record. That’s Stein’s secret weapon; he’s a leader who shares the spotlight wonderfully.  (Whaling City Sound)

Saxophonist Bixler had been out of action for a few years after his son suffered a traumatic brain injury. Based in New York City, Bixler is also the Director of Jazz Studies at Bowling Green University.  This work was commissioned as a musical look at tribes, or the groupings people create for themselves. Bixler tackled it with a core quintet-plus-string quartet, for a nine-piece band. The four movements approach the theme from the standpoint of the four groups Bixler sees himself belonging to, first as a human (“Origins”), then as a proud Wisconsin native (”Motherland”), then as a NYC musician toiling more for the love of his art than the meager money (“Trenches”), and finally as a spiritual being (“My Soul Swoons Slowly”).  The string quartet gives it an orchestral air on the first movement, while Jon Cowherd’s piano provides a melodic center, and Bixler and trumpeter Mike Rodriguez add soaring lines in unison. “Motherland” becomes more light-hearted, the horns diverging on their own paths of joy and happiness.  “Trenches,” the ode to struggling musicians, has a sort of yin-and-yang quality, soaring horn lines over solid repeated themes, as if depicting how creative fire must be balanced with hard work. The final movement, “My Soul Swoons Slowly,”  whose name derives from a James Joyce novel (“The Dead”) finds Bixler’s sax exploring over a lush midtempo groove, that is, indeed, soulful and transporting. (Red Piano Records)